President Danny Faure continued with his familiarisation tour with visits to the Seychelles Tourism Academy (STA) and the Seychelles Institute for Horticulture and Agriculture (SIAH) yesterday... Read More
http://www.nation.sc/article.html?id=263550

President Danny Faure has taken the 4th place on Africa’s ‘Best President’ list by virtue of a poll conducted by a Canadian-based research organisation ‘Leaders of tomorrow’.
http://www.nation.sc/articles/768/president-danny-faure-placed-as-africas-4th-best-president

An exhibition entitled “Gifts of State” was officially opened this afternoon at the National Museum of History, to mark the third anniversary since the inauguration of President Danny Faure.
As has been customary for the last 3 years, the exhibition showcases official gifts that President Faure has received and accepted on behalf of the people of Seychelles over the most recent twelve months of his presidency. The gifts are from other Heads of State, Ambassadors or dignitaries, local and international organisations, and also from individuals.
In the opening address, the Secretary of State for Cabinet Affairs, Mr Mohammed Afif, noted that the exhibition honours and expresses appreciation to the bearers of those gifts, and celebrates the ties of friendship and cooperation between Seychelles and those various countries. He also made a special mention of the Seychellois companies that have made donations to the Head of State on special occasions.
“Some of these gifts represent symbols and valuable memorabilia, the gems that mark important milestones in the life and history of these organisations. Ultimately the Gifts of State Exhibition is a reflection of our culture and how it interacts with the cultures of the world,” said Mr Afif.
The Secretary of State for Cabinet Affairs reiterated the core principle behind this exhibition: transparency and good governance as to what gifts are received by the Head of State on behalf of the people of Seychelles.
The official opening ceremony was held in the presence of President Danny Faure, Vice-President Vincent Meriton, the President of the Court of Appeal, Justice Francis Macgregor, Designated Minister, Mrs Macsuzy Mondon, Ministers, Commissioner of Police, Mr Kishnan Labonte, the Attorney General, Mr Frank Ally and other distinguished guests.
The “Gifts of State” Exhibition has over 100 gifts on display. It has been curated by Mr Emmanuel D'Offay, the Special Advisor for Culture, with support from the Department of Culture, the National History Museum and the Office of the President.
It will remain open for public viewing until 16 November at the National History Museum, from 9.00am to 5.00pm on weekdays and from 9.00am to 2:00pm on Saturdays.
To view the full photo gallery of Official Opening of Exhibition, please visit the State House Facebook
https://www.facebook.com/StateHouseSey/photos/a.2558997394168196/2559000240834578/?type=3&theater 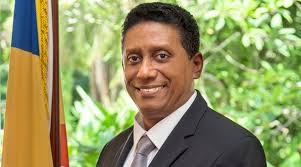 Paintings, books, and a football: Gifts to president of Seychelles in his third year go on display
http://www.seychellesnewsagency.com/articles/11811/Paintings%2C+books%2C+and+a+football+Gifts+to+president+of+Seychelles+in+his+third+year+go+on+display

The President of the Republic, Mr Danny Faure, chaired a meeting with all Ambassadors of Seychelles based overseas during a courtesy call by the Diplomats at State House this morning. Alongside the President was the Vice-President, Mr Vincent Meriton, who is also the Minister responsible for the Department of Foreign Affairs.
http://www.statehouse.gov.sc/news/4704/president-faure-holds-meeting-with-all-seychelles-ambassadors?fbclid=IwAR0CFTJwp3R3mjNSRgKITEEJjL_sxKHkyoBsZKF6wUsrX785i8iLtLN1bXQ